What does stingray taste like? Some people say that they taste like scallops, while others won’t give them the time of day and throw them back in the water. Other fishermen will only keep them for shark bait.

It wasn’t until after I gave saltwater catfish a try that I decided to give the stingray a turn at the dinner table. Just like the catfish, I had always thrown stingrays back when I caught them. Other fishermen would tell me that they tasted a lot like scallops, but I figured it was sort of an “I heard it from a friend” kinda thing.

Well after trying it, I’m here to tell you that stingray tastes awesome! I personally think that it tastes like a combination of fish and scallops or maybe even lobster. I love all three of these, so I think that it’s safe to say that Stingray meat is very good.

So, the next time you catch a Stingray, you may just want to think twice before throwing it back.

How to Catch a Stingray

Before you can try Stingray, you first have to catch one. Lucky for you, they are an easy fish to catch!

Stingrays are like saltwater catfish in that they are bottom feeders that will eat pretty much anything that they can put in their mouths. A few top choices include, dead or live shrimp, cut Ladyfish, and live finger mullet. Whichever bait you choose, it’s important that you fish it on the bottom since Stingrays are primarily bottom feeders.

The next thing to consider is your fishing gear. While a light rod and reel setup will work for the little rays if you hook into something big you’ll likely not get it to the boat. I recommend a medium set up with at least a 20 lb braided fishing line. You don’t need a wire leader since Stingrays don’t have teeth.

If you do hook into a ray (big or small), be prepared for a fight! Once hooked, a Stingray loves to head for the bottom and cover itself with sand, making it that much harder to bring it to the top.

However, even if you are lucky enough to reel it off the bottom, it’s flat, winged-like body makes it feel like you’re trying to pull a kite to the surface.

Once you have the Stingray on the boat or on land, I suggest that you immediately clip its barbed stinger with your pliers.

How to Clean a Stingray

So now that you’ve decided to try some Stingray, you now have to clean it. Cleaning a Stingray is very similar to cleaning a Flounder. However, if you’ve never cleaned a Flounder, then check out this video on how to clean a Stingray.

One of the most important things to consider when cleaning a Stingray is to use a sharp fillet knife! These things skin is similar to a shark and can dull a knife after a few cuts. Even with a sharp knife, you still may have to resharpen it if you are cleaning several rays or one really large one.

The filet knife that I use and recommend without hesitation is the Bubba Blade’s 7 inch tapered flex knife. I’ve had this knife for a number of years and still love it!

For me, the most important factor when deciding on a filet knife is its ability to keep an edge without me having to constantly sharpen it. The Bubba Blade does just that!

This knife has dramatically cut down the time that it takes for me to filet a cooler full of fish.

If you would like more information and to see the price on the exact knife that I use, you can check it out on Amazon.

How to Cook Stingray

I personally like my Stingray fried! If you have a favorite fried recipe for fish, then you can go ahead and use that. If you’ve never fried fish, then this video will walk you through a great tasting, easy to prepare, fried recipe. It’s actually a recipe intended for scallops, but since a lot of people say that stingray taste like scallops, I figured why not use a fried scallop recipe.

Are Stingrays Fish or Sharks

A lot of people think that Stingrays are nothing more than a flat shark. While this assumption is not entirely incorrect since the inside of a shark and ray are just about the same.

Some examples of other fish that are very similar include Angel sharks and Wobbegongs. While they are both flat, they are not rays. Then there is sawfish (which are rays) and saw sharks (which are sharks).

Basically, if the gill slits are on the bottom, it’s a ray. If they’re on the side, it’s a shark.

While Stingrays are not actually sharks, they are cartilaginous fish which makes them related to sharks in that their skeletons are made out of cartilage and not bone.

First, lets set the record straight! Stingrays are not aggressive by nature. They attack out of defense! Whether it be from trying to escape the deadly jaws of a shark looking for a quick meal, or an unsuspecting beachgoer stepping on them by accident.

If you’re familiar with Steve Irwin’s death, then you know that while uncommon, Stingrays can be deadly. However, most stings caused by Stingrays, while painful, can be treated without even going to the doctor. With that being said, if ever in doubt, you should seek medical attention from a professional immediately.

Unlike a Jelly Fish sting, the Stingrays barb(stinger) does not sting on contact. The barb has to penetrate the skin in order for their poison to be released.

I myself have never been stung by a Stingray, but I know several people who have and they compare the pain to that of a Catfish sting.

How to Avoid Being Stung By a Stingray

Most stings from Stingrays occur when beachgoers and surfers are walking out into the ocean. That’s because Stingrays love to bed underneath the sand in shallow waters.

To help prevent an accidental sting, always make sure to do the “Stingray Shuffle” as you’re wading through the water. The shuffle is nothing more than gently sliding your feet on the ocean floor in order to alert an unsuspecting Stingray who might be nearby that you are coming. In most cases, a ray will simply move on.

Another way to help prevent a Stingray from getting you is to invest in a good quality pair of water shoes. While there have been cases where a Stingray’s barb has actually penetrated tennis shoes, I would much rather step on a ray with shoes than without.

How to Treat a Stingray Sting

If you are stung by a Stingray, the first thing that you need to do is stop the bleeding if there is any. Next, examine the wound to see if there are any spines from the barb that are left inside you. If there are, you’ll need to immediately pull them out with a pair of tweezers!

The worst case scenario is when the spines from their barb embed themselves in the skin. While extremely rare, this can lead to the most severe consequences which may include infection, hypotension, and even possible amputations or death.

If everything looks okay and you can’t spot any barbs, you’ll want to pop a few Ibuprofen and start soaking the area with the hottest water that you can stand. Be prepared, because depending on how bad it got you, it’s going to hurt really bad for a while!

After the pain starts to subside, wash well with a bar of antibacterial soap and apply an antiseptic to the wound.

Some possible side effects of a Stingray sting include nausea, vomiting, diarrhea, extreme pain at the wound, muscle cramps, and a laceration at the puncture site.

If you notice anything like this, you need to seek medical attention from a doctor immediately.

Stingray meat could quite possibly be one of the best-tasting fish that I’ve ever had. I know that there will be some nay-sayers out there, but don’t knock it until you’ve tried it.

I always had been told that saltwater catfish was a trash fish, but after finally trying one for myself, I discovered that it was actually quite tasty.

With that being said, I hope that we answered your question “what does stingray taste like” and also provided you with additional information that can be helpful to you in case you decide to try some stingray for yourself. 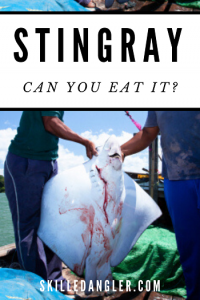