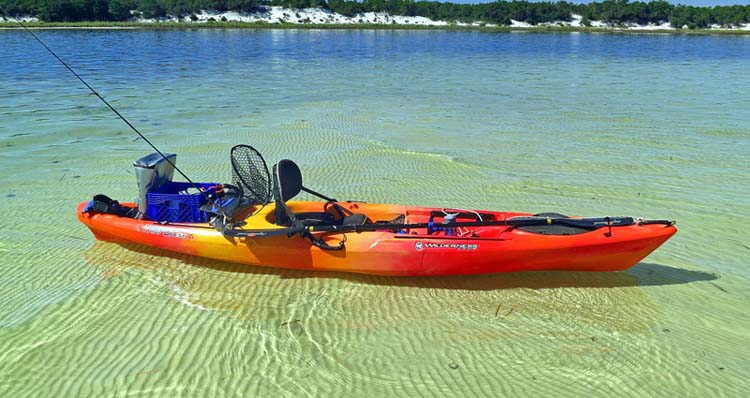 Whether you’re looking for a floating kayak cooler or another type of cooler for your kayak, odds are, you’ve found it difficult to find the right balance between size, maneuverability and carrying enough supplies with your current setup.

This is probably especially true if you’re part of the growing kayak camping trend. You’ve got to fit all of that gear in a small space and keep it fresh for days while out on the water. Unfortunately, not even the “portable” coolers are always up to the task.

The best coolers for kayaks come in many different shapes and sizes, but if you’re looking for a cooler that’s ideal for fishing and storing gear, then I recommend either the  Engel Dry Box or the  Seattle Sports Kayak Catch Cooler.  If you’re just needing something to keep your drinks and sandwiches cool while out on the water, then you really can’t go wrong with the Yeti Hopper.

Every kayaker has their own idea of what a kayak cooler should be, which is why we reviewed several different styles, giving you plenty of options to choose from. So, whether you’re looking for something to store your catch in on your next fishing trip, or just looking for a floating cooler in order to save space on your yak, we’ve got you covered. We’ve also included a handy buying guide to help you make a more informed buying decision.

We’re pretty sure that industry leader YETI takes the price of offering the best cooler for kayaks when portability is a top concern. Its construction was inspired by HazMat uniforms and the materials used on inflatable whitewater boats. And since it’s not a hard kayak, the cooler can be squeezed into smaller spaces when needed.

The Hopper TWO offers comfortable straps for easy carrying by hand and a longer, detachable shoulder strap. It also uses YETI’s own HydroLok zipper to prevent leaks of any kind (in or out). Even better, its design includes the HitchPoint Grid to accommodate some of your favorite attachments, such as a bottle opener or smartphone.

Despite being a soft cooler, the Hopper TWO’s carefully engineered insulation uses a high-density material that proves both effective and durable. The result: a highly portable cooler that keeps its contents cool for not just hours, but days. Granted, it may not hold enough supplies on its own for a multi-day trip, but there’s no denying its dedication to portability.

For the fisherman who prefers a paddle to a motor, Seattle Sport’s Catch Cooler 20 offers a dream come true to the sit-on-top kayaker. It offers a variety of straps and handles both to keep its contents secured and to attach easily to your boat.

Obviously, proper insulation is important when trying to keep your supplies cool while spending hours in the hot sun. That’s why the offers efficient cell foam insulation. However, you’ll also find another twist: a heat reflective surface.

This exterior actually helps stop the problem before it starts by reflecting much of the sun’s thermal energy rather than absorbing it. This helps the layers of insulation perform even better, keeping your supplies cool during an entire day (or even camping trip) of fishing. Just be sure your kayak has enough room first; if it’s not a sit-on-top, the Catch Cooler may not fit inside the hull.

If you’re planning to spend the day kayaking or paddle boarding on calm waters with little or no obstructions, the CreekKooler is probably your best choice. With a 30-quart storage capacity, it’s a bit larger than the rest, though that doesn’t matter since the CreekKooler is designed to float along the water itself!

The CreekKooler kind of resembles the rear of a kayak with an easily accessible storage bin and a design that glides along effortlessly. It also offers handles. You’ll even find 4 cup holders placed around the hatch.

While it’s no secret that this thing can carry much more than other kayak coolers, what’s really amazing is its ability to remain afloat even with 20 lbs of ice and enough supplies for a long day on the water. And it’ll stay cold for up to 2 days thanks to the cooler’s 2 inch insulated hull.

Engel offers a solid choice for kayakers with a portable 19-quart cooler that also serves as a dry box. Granted, this doesn’t mean that you’ll want to submerge it underwater or try to tie and float it behind your kayak, but it is designed to resist leaks both in and out when the current gets a little rough.

Despite its compact size, the cooler will easily store enough snacks and beverages for 2 people to enjoy a day of kayaking. This thing will easily fit several bottles or cans along with a few Tupperware containers and enough ice to keep it all cool. There’s even a separate storage bin that slides along the tip.

Its size isn’t the only thing that makes the Engel cooler portable. It features a steel handle for easy carrying on top. It also includes a shoulder strap for portability when hands are full (or when some creative storage options are needed inside your kayak).

Vibe’s Element 20 is definitely one of the best coolers for kayaks among the feature-rich selections. It offers and offers everything a paddler needs to not only remain well supplied on the water but also entertained.

Ready to relax with some buddies and a few beverages? The Element 20 offers four cup holder slips placed conveniently around the cooler’s rim. Even better, it actually features bottle openers in each corner.

To keep drinks cool, its durable construction is comprised of 3” insulated walls. Its lid features a gasket similar to those used in freezers. Two rubber latches on the front ensure the lid remains closed tight for several hours worth of cooling power.

When the ice does finally begin to melt, a rapid flow drain spout will remove excess moisture quickly. It also offers a quick pressure release button. And it’s all kept in place by four rubber feet at each corner of the cooler’s underside.

Buyer’s Guide: What to Look for in a Kayak Cooler

Obviously the most critical aspect of a cooler. There are a variety of insulation constructions available, and how well they work will partially depend on the contents. We typically look for a thickness of around 3” on most coolers, whether hard or soft.

To improve the insulation even further without getting too thick, some coolers also use a reflective surface. This helps prevent heat from entering the cooler as most of it is reflected rather than absorbed.

This option can actually be a little tough to decide. Ideally, we’d like to keep all of our gear in the boat. But is this always practical?

Obviously, your kayak’s hull size will play a big role here, as it can only fit what it’ll hold. However, you certainly don’t want to weigh the thing down either. Too much weight can interfere with your balance and ability to control the kayak. The actual extent of this depends largely on the kayaker’s skill level, so you’ll need a little time for testing.

Of course, the activity in question will also determine your ideal cooler placement. If you’re planning to spend a few hours on flat water (either a large lake or calm river), then an external kayak should be fine and possibly even preferable (especially when camping). Of course, if you plan to spend the day paddling rapids, you’ll definitely need something inside the boat that won’t take too much space (or throw off your control).

Sometimes, the cooler may not be designed to fit inside of a kayak’s hull. Yes, you could strap it down and only loosen the straps when you need to pull something out. However, it’s important to remember that you are responsible for anything that falls off of your boat – and you certainly don’t want to ruin your day on the water with a littering citation.

On top of that, it really doesn’t take much to knock something as bulky as a cooler off of your sit-on-top – the wake of a passing speedboat, for example. Ideally, your cooler will have straps or handles of its own to help secure it in place even better.

Also, you may find that it’s easier to keep a few accessories attached to your cooler. This can include bottle openers, removable cup holders, or even utensils. Keep an eye out for these add-ons.

Anytime your paddle is out of the water, your kayak is at the mercy of the current. This may not be so bad on flat water but could prove costly in a stream or river. That’s why it’s important to have quick access to anything you’ll need along the way.

The best coolers for kayaks must strike a balance between securing the contents and accessing them quickly. Most coolers feature clamps that lock and unlock very quickly, yet still keep the lid closed tight. Some also include extra convenient features, such as cup holders and even bottle openers.

Coolers even seal themselves closed in different ways. Soft coolers frequently use zippers and velcro to keep contents cool. However, it’s important to note that velcro isn’t always required to prevent leaks; for example, the HydroLok technology found in some YETI coolers is completely waterproof in itself.

Coolers with harder exteriors typically use some variant of latches. Metal, plastic, and rubber are among the most common. Metal is the most durable but typically harder to open, which plastic is easier but less durable. Rubber latches typically find the perfect balance between ease of use and durability to impact, although they tend to wear our faster with regular use over time.

A cooler’s storage capacity is typically measured in quarts. And unlike camping trips, the best coolers for kayaks aren’t always the biggest. Try to estimate your storage needs as accurately as possible, then consider the smallest capable cooler.

For comparison, a 10-quart cooler can fit around 10 12 packs with about 10 lbs of ice. Don’t be afraid to get a little creative with your storage options; some coolers make it easier with integrated storage bins. Just be sure to test it out before hitting the water.

Coolers are actually kind of like kayaks: they all seem the same until you need one for a specific need. Just as you wouldn’t want a creeker for flat water, it wouldn’t be much help to get a towable cooler when paddling through the rapids. So while the best coolers for kayaks won’t be the same for everyone, we’ve offered a pretty solid start here.

Still, if you’re a little unsure, we’d like to especially recommend either the Seattle Sports Catch Cooler for its feature set or YETI’s Hopper TWO for its portability. But don’t stress too much about finding the best coolers for kayaks: we’ve covered enough terrain here to find something for everyone.

Kayak Coolers Reviewed In This Article