Ultimate Guide To Saltwater Catfish (Are They Good to Eat?) Plus Much More! 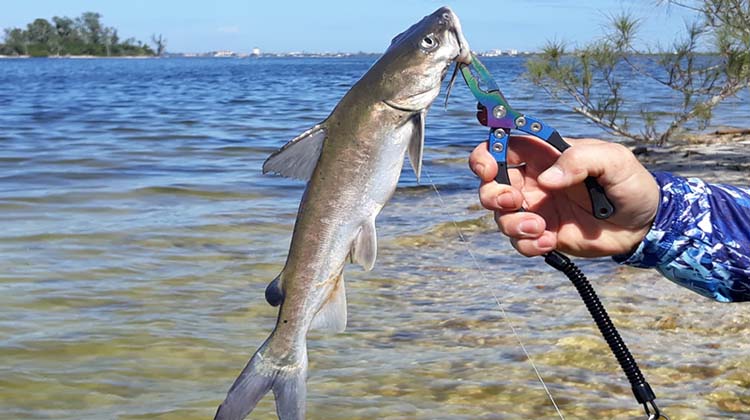 Are saltwater catfish good to eat? That’s a question that gets asked a lot! It’s also a question that until recently I would have said no to. However, after seeing several YouTube videos of people eating them and claiming that they tasted the same, if not better than their freshwater counterparts, I had to try them for myself…and I liked what I tasted!

Are They Safe To Eat?

In short, yes, you can eat saltwater catfish! They’re completely safe to eat. As far as table fare goes, I personally don’t think that they taste much like a freshwater catfish, but more like a Whiting or Sea Trout.

While I was impressed with the flavor of saltwater catfish, I don’t think that I’ll be keeping them for dinner on a regular basis, as they’re super messy and a pain in the rear to clean.

So, if you’re happen to reel one of these slimy bottom feeders while out saltwater fishing, you might want to think twice about throwing it back, and taking it home to cook up!

While Saltwater Catfish may not be thought of as a good eating fish, you won’t find one fisherman who doubts their fighting ability. These fish fight like a freight train, providing a fun-filled fishing experience for even the most inexperienced angler.

Over the years, saltwater catfish have gotten a pretty bad reputation. They’ve been labeled as a “trash fish” by a lot of fishermen and are typically just thrown back into the ocean.

Here’s a few reasons that I can think of as to why these ocean catfish have received such a bad name over the years.

1. Because That’s How It’s Always Been

So, how and why did they end up with such a negative reputation? I’m not really sure when or how this fish has managed to acquire such a bad reputation when it comes to table fare.  All I know is that ever since I started fishing as a little boy, I was always told to throw them back.

It makes me wonder if the people who say it’s not a good fish to keep have actually ever tried to cook one up.

2. Hard To Clean And Slimy

It could also be that based on their numbers, you are more likely to catch a saltwater catfish than that prized redfish you’re targeting. I can speak from experience that it can be really frustrating having this pesky nuisance steal your bait and leave your line and gear covered in slime.

And let’s not forget about their poisonous barbs! These pointy things can really hurt if they poke you. The good news is that you can usually prevent this with a good pair of fishing pliers.

There are two types of saltwater catfish – Hardhead catfish and Gafftopsail catfish. Both of these ocean catfish can be found throughout the Southeastern United States and the Gulf of Mexico. They thrive in coastal waters, including bays, river mouths, estuaries, and will even venture into brackish waters.

Basically, if you plan on doing any type of saltwater bottom fishing in these areas, there’s a very good chance that you’ll catch one of these pesky fish.

Hardhead is the most common of the two saltwater species. They have a brownish to gray-green body, with a white to yellowish belly and can grow up to 24 inches (12 pounds).

Watch Out For The Spines!

One thing to look out for when handling catfish of any type is their spines! Hardheads have three prominent, sharp spines (one at beginning of dorsal fin and one on each pectoral fin). Believe me, it’s not a pleasant experience getting poked by one of these bad boys.

How To Catch Hardhead Catfish

Like their Gafftopsail cousins, Hardheads are super easy to catch. Commonly caught from bridges, catwalks, and piers, particularly in passes and inland waterways, they will eat everything from shrimp, squid, baitfish, crabs, cut bait, and even fall victim to artificial lures from time to time.

Also known as Sailtop Catfish and Sailcats, Gaftopsail Catfish are less common than the Hardhead Catfish and are usually larger and widely considered to be better table fare, although after taking the plunge and actually eating a Hardhead, I honestly can’t tell any difference in taste.

Gafftopsails have a bluish-green back, fading to a silver-white belly and like other catfish, are equipped with three sharp spines that need to be taken seriously when handling.

As far as appearance goes, the one noticeable difference between the two saltwater cats is that the Gafftopsail sports a super long dorsal fin, giving it the appearance of a sail, which is how the fish gets its name.

Gafftopsails can be found in the same waters as Hardhead catfish and will eat pretty much the same thing.

While Saltwater Catfish are not poisonous to eat, they do have a poison in their spines that can make their sting extremely painful, much like a bee sting or even a small stingray sting.

However, unlike a Jelly Fish sting, the spines of a Saltwater Catfish do not sting on contact. They actually have to be inserted into your skin, which is why it’s very important that you handle them with care. Their spines are razor sharp and have been known to penetrate the soles of tennis shoes without any problems.

The best way to treat a Saltwater Catfish sting is to first remove all of the spines from the affected area. Next wash with soap, then soak for about 30 min in warm water. If needed, it’s recommended to take a few Tylenol or Advil.

You’ll want to keep a close eye on the area where you were stung. If you notice redness, swelling, or an unreasonable amount of pain, you’ll need to seek medical attention.

Another thing to keep in mind is that contrary to some false information, a catfish’s whiskers (saltwater or freshwater) do not sting.

How To Clean a Saltwater Catfish

Cleaning a saltwater cat is pretty much the same as cleaning a freshwater catfish! However, they are much slimier than their freshwater cousins.

This makes them incredibly slippery, so you need to make sure that you have a good handle on them before you begin cleaning them.

I’ve come extremely close to slicing a finger off when fileting one of these suckers!

Regardless if you want to filet or skin them, I highly suggest that you get yourself a cutting board that has a gripping clamp on one end.

I personally use this type of cutting board for most of the fish that I fillet! In fact, the one that I use is the Rapala Fat Boy. This particular cutting board is wider than your traditional “clamp style” cutting board and is made out of a non-porous material that makes it super easy to clean.

This thing has really made cleaning fish so much easier and less dangerous I might add!

If you would like to see some more reviews and see the price, you can check out the exact one that I use on Amazon.

How to Cook Saltwater Catfish

When it comes to what the best recipe is for cooking Saltwater Catfish, I highly recommend that you choose a fried recipe.

The recipe that I used is called “Big Daddy’s Deep-Fried Catfish.” It’s a little spicy, but you can always replace the Cayenne pepper with another seasoning such as “Old Bay”, or just take it out completely. This recipe is super simple and the best part is that it requires beer!

If you don’t feel like mixing your own batter from scratch, I’m sure that any premixed fish fry batter will do the trick.

So are Saltwater Catfish good to eat? In my humble opinion, yes they are! They are safe to eat and they taste the same if not better than a Freshwater Catfish. If you can get past the stigma that has been placed on this fish and the fact that they are extremely slimy and are a pain to clean, then I encourage you to fry some up the next chance you get.

I know that I learned my lesson when listening to people about what is good and what’s not. Next time someone tells me that a certain fish is bad for eating, my next question will be, “have you ever tried it?”

I think the next time I catch a stingray, I might just have to try it as well! Supposedly they taste just like scallops.