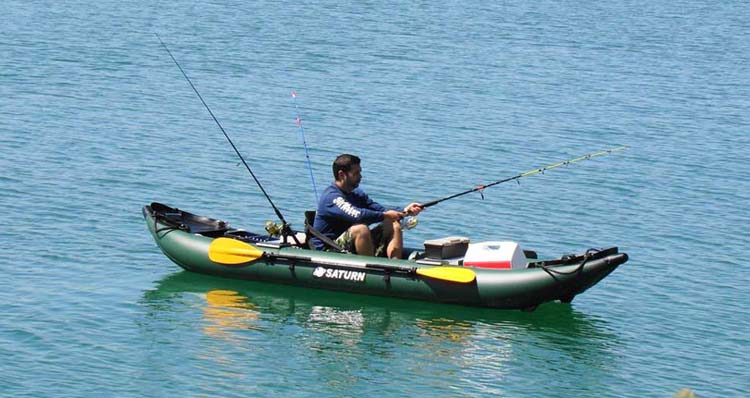 In recent years the sport of kayak fishing has exploded in popularity and for good reason! Kayaks are an inexpensive way for anglers to get to where the fish are without having to deal with the cost and upkeep associated with owning a boat. With that being said, are inflatable kayaks just as good for fishing as their polyurethane counterparts, or are they just full of hot air?

Is fishing in an inflatable kayak a good idea?

In short, an inflatable kayak that’s specifically designed for fishing can make a great alternative to your traditional hard shell fishing kayak. With that being said, I wouldn’t recommend fishing from one of the cheaper versions that are being sold to novice kayakers. If this is what you’re considering, then you may as well stick with a cheap plastic kayak!

However, since you can buy a good quality hard shell kayak for about the same price as you would pay for an inflatable kayak that’s built for fishing, you have to ask yourself…is it better to go with the inflatable or should you just stick with the traditional kayak? While that’s a question that you’ll ultimately have to answer for yourself, I’ve put together a list of questions and answers that might help you in that decision.

Fishing in an Inflatable Kayak vs Traditional Kayak

When it comes to how well an inflatable kayak stacks up against a hard shell kayak for fishing, there really isn’t any comparison, especially if you’re trying to compare the cheaper versions.

While true, an inflatable kayak that’s designed for fishing can make a great choice for certain people depending on what they are hoping to get out of it, but for serious fishermen, a hard shell kayak wins in just about every category hands down!

A good example of an inflatable that’s made for fishing is the Strait Edge Angler PRO by Advanced Elements. This inflatable kayak appears to have everything that you would need to have a successful day on the water.

I personally can’t vouch for it, but if I were looking to buy an inflatable kayak for fishing, this would be one of the first ones that I would be looking at. If you would like to find out more about this kayak, you can check it out on Amazon.

With that being said, you could have yourself a top-of-the-line hardshell fishing kayak such as the Perception Kayak Pescador Pro for about the same price as the Advanced Elements inflatable kayak.

Aside from their ease of storage, and the fact that they are lightweight, which makes carrying them a breeze, in my opinion, there really isn’t any real advantage of fishing from an inflatable kayak.

Are Inflatable Kayaks Hard to Blow Up?

Have you heard that inflatable kayaks are hard to blow up? I suppose they could be if you were to try and blow one up with your mouth, but lucky for you, most (if not all) inflatable kayaks come with a hand pump.

This makes inflating your kayak a breeze! If hand pumping still seems like a little too much work, then you could always invest in one of the many electric kayak pumps available on the market.

While these types of kayaks are not all that hard to blow up, they are a pain in the butt to deflate!

If you’ve ever had to let the air out of an air mattress in order to pack it back inside its box, then you have somewhat of an idea of what I’m talking about.

Are Inflatable Kayaks Easy to Tear?

Despite popular belief, inflatable kayaks are not easy to tear! Yes, compared to a hardshell kayak, they are much more prone to developing some type of damage to their body.

However, unless you purposely take a knife to them, or snag them on a sharp or pointed object in the water, the chances of them tearing while you’re fishing is pretty slim.

Most quality inflatables are constructed of the latest in technology when it comes to their materials.

This includes PVC, a synthetic rubber called Hypalon, and Nitrylon. In fact, some kayak manufacturers are phasing out PVC altogether and going with the more environmentally friendly
Nitrylon.

A good quality inflatable kayak that’s specifically built for fishing will cost you about the same as a traditional fishing kayak that’s comparable in size.

However, there are plenty of other inflatable kayaks on the market that go for about half the price.

For instance, Sea Eagle has several sports kayaks that you can get for about $300. That’s about half the price of the Advanced Elements kayak that I previously mentioned.

However, since these kayaks are not designed specifically for fishing in mind, they won’t come with most of the accessories that a fishing kayak comes with.

Can You Attach Fishing Accessories To Inflatable Kayaks?

Something that all kayak fishermen love to do is to customize their kayak to best suit their fishing needs.

This could include installing custom rod holders, adding a cooler, installing a fish finder and even putting a trolling motor on the kayak.

While you won’t be able to do this with your standard sport or touring inflatable kayak, most fishing kayaks that are inflatable come with attachments that will allow you to customize it as you see fit.

How Heavy Are Inflatable Kayaks?

One of the few features that an inflatable kayak has over a traditional kayak is that they are extremely light!

On average an inflatable weighs anywhere between 30-50 pounds. This on average is about half of what a hardshell kayak weighs.

Here are a few inflatable fishing kayaks by weight:

How Many People Will an Inflatable Kayak Hold?

It may surprise you to find out that they make inflatable kayaks that can hold up to three people at a time. Now, these are not fishing kayaks, but rather a family type kayak built for cruising around the lake.

There are a couple of brands with fishing models that will hold two fishermen, but I wouldn’t suggest that you go this route.

With any type of kayak, whether it be an inflatable or traditional, you are already limited when it comes to the room.

I don’t even recommend that you try and fish on a two-man traditional kayak!

Are Inflatable Kayaks Hard to Paddle?

No matter what you read or who you talk to, an inflatable kayak is much harder to paddle than a hardshell kayak, so getting to point a to point b is going to take quite a bit longer.

Part of the reason is that most inflatable kayaks sit out of the water higher than a traditional kayak, which makes them more prone to the winds.

This alone can make paddling much more difficult. If you don’t have to travel all that far, then this might not be so much of a problem. However, it’s been my experience when fishing that the fish are not waiting for me at the water’s edge to catch them! I sometimes have to paddle pretty far in order to reach my fishing destination.

Aside from wind resistance, inflatable kayaks don’t have the sleek lines that hardshell kayaks have. These lines and concavities on the bottom of the hull are not there just for looks! They are designed to cut through the water, which in turn makes paddling much easier.

For the most part, inflatable kayaks are pretty stable, especially if you plan to only sit in your kayak while fishing.
However, if you’re like me and like to stretch your legs while standing and sight fishing, then I wouldn’t suggest that you invest in an inflatable kayak.

While stable when paddling and sitting, they are highly unstable when standing.

I suppose that you could come up with some type of DIY outrigger setup, but why go through the trouble when you could just get yourself a hardshell kayak that’s much more stable.

Inflatable kayaks have their perks, yes, you can fish off of them, but it definitely depends on why you wanted this type of kayak to begin with that will make it worth buying. In other words, if you live in a place where there is no place to store a hardshell kayak, then maybe the inflatable is exactly what you need to be able to get out on the water. If you are interested in the inflatable kayak because of price comparison, in my opinion, the price difference is not great enough to outweigh the pros of having a hardshell kayak.